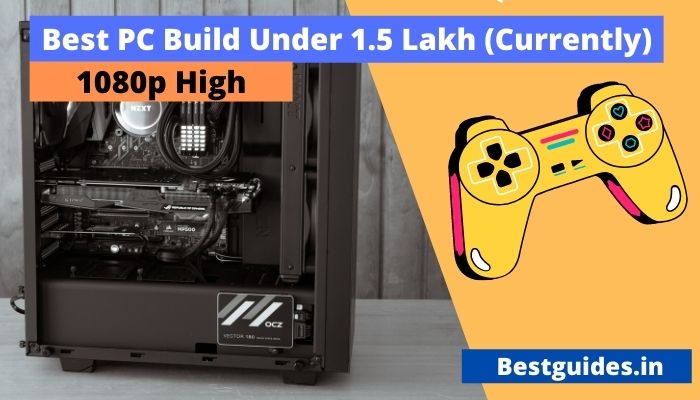 If you want to build a pc under 150000 then you can consider checking the list of components used in the pc given below.

Also, you will get two options in this budget one for gaming and the other for productive working.

So let’s check the components used in that pc build.

First, we have selected the components according to a gaming pc build. After that, you will get full information about the components required on a pc build for productive work.

Also, a PC built for productive work is also capable of gaming at 1440p resolution. So let’s check the first component of the gaming pc build.

This is a good processor and is affordable currently from AMD. It comes with 6 cores and 12 threads. However, if you can get i5 11600f in that place then you can consider that as well.

It is based on AMD’s latest 7nm architecture. Further, it has 32 Mb cache memory which makes it much smoother.

Why consider this processor

However, in that budget, you can expect a decent graphics card performance from this processor.

It can easily beat Intel’s 11th generation i7 processors in gaming. Also, it is a good processor for productive work as well.

The Geforce RTX 3070 graphics card is still popular in the market for playing games on ultra graphics.

RTX 3070 performs even better as compared to the old RTX 2080 ti graphics card. However, its price is almost similar to the selling price of the RTX 2080 super.

But still, the launch price is only 44500 in India. Due to the high demand for graphics cards, their prices have been raised that much.

Why consider this graphics card

This is one of the best graphics cards in that budget for playing games on 4k resolution. However, if you want to play games with full ray tracing then you will get a maximum of 60 frame rates on 1440p resolution.

However, if you want to use the newly launched i5 then you can consider these graphics cards for i5 12th gen processors.

The motherboard is an important component of a pc build. It should support all the select components of your PC build.

Therefore, we have selected an MSI MAG B550M Mortar WiFi motherboard for this pc. It is compatible with the selected processor and graphics card. Also, supports wifi and PCIe gen 4 SSD.

Why consider this motherboard

If you want a motherboard that supports the newly launched PCIe gen 4 SSD’s and the latest AMD processor then you can consider this motherboard.

Moreover, it has the latest WIFI 6 included with two antennas for getting a decent range from your router.

If you want to play games, 8 Gb memory will be more than enough. But if you want the best ever smooth running computer then you can consider 16 Gb of memory.

For 16 Gb memory, we have included two 8 Gb ram sticks. Because two Memory sticks perform much better as compared to single memory sticks.

If you want a normal 3200 Mhz 8 Gb memory stick or high-speed memory stick then you can consider Hyperx fury 8 Gb.

Moreover, you can also check a memory stick RGB according to your requirements. However, you will get better performance with that memory.

SSD is also important for fast booting and working of your computer. Also, this is one of the best options available in the market for SSD storage.

However, this is PCIe 3.0 version SSD storage. But still, it is way faster read and write speed as compared with PCIe 3.0 SSD.

Why consider this SSD storage.

If you want an SSD storage that is too fast and gives up to 3500 Mb/s read and write speed then you can consider this SSD storage.

Deepcool is a decent brand for power supply units for this pc build. It will be affordable and give you an option for being a modular power supply.

The power requirement of this pc is only 650 watts. But for future-proofing, I have included 750 watts of power supply.

Also, For smooth and better power supply to your computer, it will be a good solution. Moreover, it comes with Japanese capacitors with 80 plus power efficiency.

Because the temperature of your processor can be increased a lot while you’re playing games for a long period.

Therefore, a liquid cooler will be a decent option for controlling the temperature of your processor.

The main thing while selecting your cabinet would be checking the size of the graphics card. If your graphics card won’t fit on that cabinet then it will not work.

Also, the 240 mm liquid cooler should be supported on that cabinet.

After that, you’re done with all the components required for the gaming pc build. Let’s discuss the gaming performance of that pc.

The gaming performance of this PC build.

For this PC, I have used an RTX 3070 graphics card and Ryzen 5 5600x processor. With that combination, you can easily get 1440p resolution gaming performance.

However, if you want to play slightly old games then you can easily get 70+ frame rates while playing on 4k ultra settings.

Even when you play games like Shadow of the tomb raider you can expect 70+ frame rates while playing on 4k resolution.

That’s it for the gaming pc build. So if you want to build a pc under 150000 for productivity then you can consider the components given below.

While building a pc for productive tasks. You should keep in mind that spending more money on a processor than a graphics card is important.

So if you want to build a pc for productivity and some 1440p or 1080p ultra gaming then consider the pc build given below.

This is one of the most powerful processors in the market for video editing and other productive tasks.

Why consider this processor

If you want an ultimate processor for productivity then you can consider this processor. Moreover, this is an old processor which was launched almost 21 months ago.

This is one of the fastest SSD storage available on the market. Also, the price of this SSD storage is also affordable.

You will even read and write speed up to 6600 Mb/s. However, you need a PCIe 4.0 Nmve slot in your motherboard with a good heat sink on it for much better speed.

Radeon Rx 6600 XT is a graphics card that gives you a much better gaming experience while playing games at 1080p resolution and 1440p resolution.

It performs 10% slower as compared with RTX 3060 ti in some games. But in most games, it will perform almost similarly.

Why consider this graphics card.

If you want a decent graphics card for gaming then you can consider this graphics card. However, you may face issues while playing games with ray tracing.

But without ray tracing, you can enjoy gaming at 1440 resolution with high settings. Moreover, the performance may be around 50 frame rates while playing newly launched games.

For cabinets, you can select any mid-tower cabinet that has enough space to hold your graphics card. Also, the cabinet should support 240 mm liquid coolers.

This motherboard will be enough for this pc build. Also, it supports the PCIe 4.0 which offers decent read and write performance as well as compared to PCIe Version 3.0 Nvme SSDs.

Also, the graphics card and processor are fully compatible with this motherboard. However, for an even better value, you can consider Z570 Motherboards.

16 Gb memory will be enough for this pc. However, if you need more then you can consider buying one more 8 Gb memory stick that gives your pc a smooth working performance.

The power requirement of this pc build is only 650 watts. However, the 750 watts powers supply is only chosen to make sure that the upcoming graphics card will also be compatible with your pc.

White Pc Build for this budget.

If you want to build a white gaming pc built for this budget then you can consider buying the power supply, cabinet, graphics card, and fans in white color.

Also, after that, you can even consider checking the white color motherboards. But these will be way more expensive and don’t seem that great.

For doing pc build you should keep in mind some pc building tips. Also, you should spend money on processors and graphics cards according to your needs.

In gaming, the Ryzen 5 5600x processor will be more than enough. However, for productivity, you can consider Ryzen 9 5900x processors as well.

Now I want to hear from you. Do you like this pc build or do you have any queries? Let me know in the comments before or feel free to contact us.