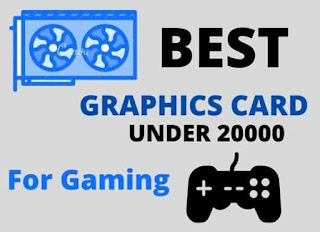 A Graphics card is important for gaming if you want a good graphic card under 20000 then you have to invest some time to find the best.

Table of Contents (Get Overview)

How to pick the best graphics card under 20000

If you want to play games. Then currently you have only two options, AMD or Nvidia. Both are the best brands for graphics cards. But the major difference arises with the price they offer.

AMD generally offers value for money graphics cards and as per Nvidia, they try to give the best possible performance from a particular model of a graphics card.

So, if your budget is too slightly low then you can go with AMD GPUs. But still, if you want a graphics card that will give future-proofing performance then Nvidia is a great option for you.

If you want to make it easy and decide which graphics card would be best then check out BG Graphics card Finder Spreadsheet.

If you want better performance you need as many as possible GPU cores and Clock speed. But one thing to be noted is that both cores and clock speed are important for gaming.

That means if you are playing games on low settings AMD will be a winner in all the resolutions but if you want to play in high settings then Nvidia always gives better performance.

The minimum Vram available in a list of Graphics cards is 4GB DDR5 and all graphics cad support 1080p giving at high to ultra settings with 50+ fps.

As a memory, you will get a maximum of 8 GB from AMD and 6Gb from Nvidia. However, Nvidia 6Gb Vram is based on Gddr6. That gives more performance as compared to Gddr5.

For bandwidth in a graphics card, the maximum bandwidth is supported in the Nvidia graphics cards. This means that they will give a more constant performance while playing games and video editing.

In general, you have to check if the PCIe version of the graphics card is supported by your motherboard. However, in the newer motherboard, you will get the latest PCIe 4.0 and 3.0 support.

This graphics card is launched just this year and the performance is similar to RX 570 8GB with less power consumption.

But the current price is still higher than its launch price. This graphic Card is based on the latest architecture which will help you to get lower GPU temperatures while gaming.

The RAM type in this graphic card is gddr6 and this is the latest Ram type available. 4GB Ram is enough for 1080p gaming. However, the video editing is really bad with this graphics card.

If we compare both the cards we will see that there is 10% to 15% more gaming performance available in Rx 6500 XT.

In newer games, the performance gap will be increased as Rx 6500 xt supports the newly launched Gddr6 memory.

This graphics card is the successor of Rx 5500xt 4GB and as it is an improved version so it will give you more value in the current market.

AMD RX 580 8GB is another uh best graphic card in this budget and if you want to play games at 1080p medium to high setting it will help you in that.

This graphic card has an 8GB RAM variant which helps you to get more stable gameplay in 1080p gaming.

The frame rate available at 1080p is around 60 FPS if you are playing your game at medium voice settings.

But if you are playing it with some lower settings then you’re giving FPS would be around 70 to 80 FPS which are enough for a great gaming experience.

Tip: For better deals USE ADD to CART option for Buying during Amazon Sales.

Comparison of performance with GTX 1060 3GB.

GTX 1660 6 GB graphics card is launched in the last year but still, it gives you great performance as per the price.

This graphics card performs similar to RX 580 but as per the prize, this gives you slightly less performance than it.   It is mostly used in a laptop under 80000. At this price, it provides a great value graphics card for a laptop.

Comparison of performance with GTX 1050ti

GTX 1050 ti is an old graphic card that now doesn’t give you a great performance if you are buying it under a budget of 20k.

GTX 1660 provides you 40% more performance than GTX 1050ti 4Gb. But in some games, we will see the performance gap is reduced to 30% but that’s enough if you want to play a game with the latest better.

This is another good graphics card from Nvidia which helps you to play games better. This graphics card is launched last year and its price is around 17000.

It helps you to play games on 1080p high settings with smooth fps in high-end games like the shadow of tomb rider and assassin’s Creed Odyssey.

But this graphics card gives some fewer fps as compared to RX 570 in battlefield V games. However, it performs better than the RX 570 majority of the games.

Comparison of performance with RX 570 4GB

Because of the new graphics card with new architecture which small and faster as compared to the older version.

This card from AMD gives an amazing price to performance value. Is card launched at around price more than 30000 but now its price is around 18000.

Best graphics card under 20000 for amazing gaming performance at 1080p ultra settings. Full review and comparison with the graphics card in this budget.

RX 590 has an 8GB ram which enables you to get maximum performance from the graphic cards in this budget. Just one issue comes with this graphics card which is the TDP or power consumption of this graphic card is slightly higher.

This means it requires a higher power supply and 8 pin power connectors working properly. Electricity bills will also come slightly higher as compared to others but that doesn’t matter for gamers I think.

This graphic card allows you to play games on 1080p ultra settings with 60+ frame rates in all games which you like to play. Only in Assassin’s Creed Odyssey frame rates are 40 to 60.

Even this graphics card helps you to play games and the same frame rates in the coming games in the future.

If we are comparing RX 590 and GTX 1060 6GB then we will see that the performance gap is about 20% sometimes even more.

However, this comparison is done on ultra settings in lower settings. You will get smoother performance with RX 590 8Gb

Here’s my top 5 graphics card under 20000. Now I want to hear from you which of the graphics card from our list you like the most let us know by leaving the comment below.