In today’s pc are an important part of our life. But due to some reasons, everyone can not able to build pc which costs around 40-50K. So in today’s article, I am going to discuss which is the best pc under 10000.

This is pc build you can expect some gaming and video editing performance. But this you get amazing performance is you are building for office use or some basic browsing.

Is that which is good for some 720p level gaming and the video editing at the small level, browsing, and other small works can be done easily in this pc under 10000.

You can build this pc easily but if you think it is difficult you can assemble it for some money. The following are the best components used in this pc under 10000.

Best components for a pc build under 10000

The description of all the parts used in given after their names.

Specification of this processor

For basic working and some low-end video editing and programming is also possible with this processor.

Even for gaming, you can play any High-end games at 720p(HD resolution) medium to high settings with this processor.

Tip: For better deals USE ADD to CART option for Buying during Amazon Sales.

Specification of this motherboard

In this budget, you have an option of Zebronics H61 motherboard. This motherboard will fully support the processor selected. Even you can install some high-end graphics cards on this motherboard.

You can add 2 DDR3  RAM to this motherboard. If you paired this motherboard with 8Gb 1600 Mhz RAM then it would be enough for you to play games on 1080p (Full HD resolution) medium settings.

On this motherboard, you can install a high-end graphics card like GTX 1050 or GTX 1650. But still, they will not be included in this pc build.

That means if you want to play games on Full HD (1080p) resolution then this motherboard is also capable. But not high settings up to medium settings.

The graphics card is the most important part of a gaming PC. If your computer doesn’t have a graphics card you can’t able to play games with smooth fps.

This graphics card is not available to buy at any online shop like AMAZON, FLIPKART. So you have to buy it from Aliexpress or Olx.in.

That you can buy for future builds. The price of this around Rs 2500 in second-hand condition. You can check on olx, quikr. It is much better than a GT 710 2gb or GT 730 2gb graphics card.

The main functioning of the ram is to make your system working fast. The name of the RAM Hynix ddr3 1600 MHz.

Specifications of this RAM

But due to the limited budget for this computer. We are going to select 4 GB ddr3 ram which supports perfectly with our motherboard.

You can extend in the future as per your requirements. The price of this RAM on AMAZON is: 1400

As the price of this SMPS is very less. Its price is around Rs 800 on AMAZON.

In this build, we aren’t able to include 1tb hard disk because it’s the price is around 3000.

But we are including Seagate 500 GB HHD.  The SSD isn’t possible in this budget.

I also build a gaming pc under 50000 with this cabinet. The price of this Harddisk on AMAZON is: 1700

The best cabinet for this build is Circle Desire D1. This is an amazing cabinet with good looks as per the budget.

It has an additional 2 USB slots. This cabinet comes with SMPS which I selecting this build.

The price of this cabinet on AMAZON is: 2189

Summary And total price of PC under 10000

Performance of this PC build

You can play games and do video easily. This is the best gaming PC build under 10000. In general, you will get more than double the performance as compared to a core 2 duo processor.

There will be no lag and stutter while using some basic software’s like chrome and Microsoft excel e.tc.

As per the gaming performance you can play some small but good games like GTA san address and GTA vice city easily.

But if you want play GTA V or other high end games then you have invest some more money and buy an graphics cards. That will be GTX 750ti or GTX 950. With these card you can play high end games with this pc easily.

It will not cost you more than 3 thousand to Purchase GTX 750ti 2Gb.

Important: Never purchase GT 710 or GT 1030 graphics cards. They are not made for gaming just as a display card.

If you want to play games on 720p settings with good frame rates then this pc build will be good for you.

But if you are saying that it is hard to buy a GTX 750ti graphics card. Then you can check other GTX graphics cards like GTX 650ti or GTX 660.

Now I want to hear from you, do you liked my picks for this budget pc build. Let me know your thoughts by leaving the comments below. 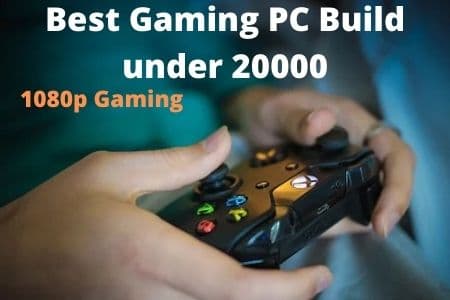