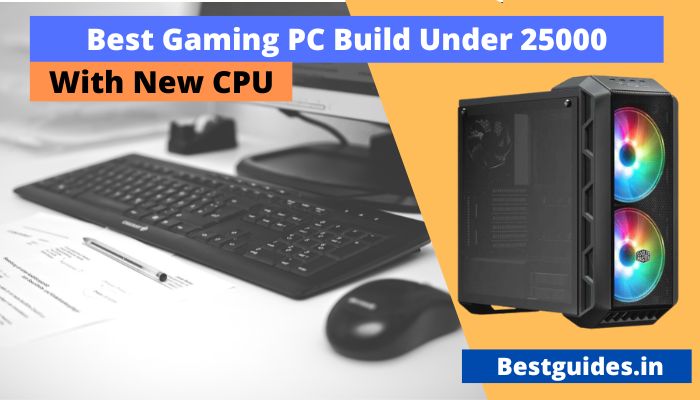 If you want a pc that can give some sensible gaming and working experience, consider checking the PC build given below.

You will get two PC builds, one from AMD and the other from Intel.

So let’s check the components used in that PC build.

Due to the low budget, there is no option for a good graphics card. So you have to make a PC with the newly launched AMD Ryzen 5 APU. However, if your only aim is gaming then consider checking the other build given below.

The Price To the performance of the PC is very nice because of the new processor and future upgrade possibilities.

This process is newly launched and offers decent performance in gaming and working as well. Also, it is a Ryzen 5 processor which means you will get decent processing power.

However, the graphic performance will be lower as compared with the GTX 1050 ti graphics card. But still, you can get playable frame rates on almost every game while playing on 1080p low settings.

Why consider this processor.

If you want to do normal gaming and some office work then you can consider this processor on your desktop. However, if you only want to get good gaming performance then consider checking the next PC build.

After the processor let’s check the next component for the PC build.

This motherboard will be a great option if you want to use a processor from AMD Ryzen 3rd generation. Also, it has the option to install four DDR4 memories.

As per the USB options, you will get four USB 3.2 gen 1 and two USB 2.0 ports. It will fully support your processor without any issue.

Why consider this motherboard

If you want a budget-friendly motherboard that comes with 4 DDR4 memory slots and in-built support with a 3rd generation Ryzen processor then you can consider this motherboard.

For the normal working condition and gaming, 8Gb memory is more than enough. However, you may need 16 Gb of memory while playing games on 1440p or higher resolution.

Why consider this memory.

In this memory, you will get a decent speed of 3200 Mhz which is good for playing games at 1440p resolution. It also comes with a heatsink on both sides so that the temperature of this memory remains lower while normal working.

For the power requirement of this computer under 25000, the 450-watt power supply will be enough. However, if you want to add a better graphics card in the future then you can 550 watts or 650 watts power supply.

Why consider this power supply.

For this PC build, a 450-watt power supply will be more than enough. Also, It comes with good quality according to the price of the power supply.

This 500 Gb hard disk will be more than enough for the basic requirements. However, if your requirement is around 256 Gb then you can consider 256 Gb SSD storage.

Because SSD performance is much faster than a hard disk.

Why consider this SSD storage.

For the normal working requirements and storing of files, this hard disk will be more than enough. However, if you want a much better storage option then you can consider the 240 Gb SSD.

For this PC Build, a mid-tower cabinet is an important requirement. But due to the low budget, you can consider checking a cabinet worth 1000 rupees.

This cabinet may available online but mostly it will get available on the local or offline markets.

For gaming performance, you can play games on 1080p low to medium settings. However, if you want to play some old games then you can increase the settings to 1080p medium to high.

Also, you will get getting an amazing processor that can handle high-end games on high resolutions if you want to install a higher graphics card in the future.

Moreover, from this Ryzen 5 PC build you can do sensible gaming at 1080p resolution. Minimum to minimum you will get playable frame rates on low settings.

As you know this PC build has a B450 motherboard that contains four memory slots and an M.2 slot. But that M.2 slot is not based on PCIe 4.0. So let’s check the other upgrade options.

Also, the processor will be capable of playing games with a high-end graphics card.

In case you want to install more memory sticks on this PC then you will have three more empty slots for that.

M.2 SSD is a nice option if you want to increase the speed of your PC. But you will only get an option to use PCIe 3.0 SSD storage.

This is a gaming PC because, in this build, you will get an option to include a dedicated graphics card. Also, you will get the option of i3 10th generation for decent performance while doing normal work.

However, the performance of this processor will be lower as compared with the Ryzen 5 4600g in the above build.

For gaming performance, you need a processor and a graphics card. Due to the increase in the price of graphics cards you have to select the option of Ryzen 5 4600g.

However, if you can get the second-hand graphics cards mentioned in the second build then you will get much better gaming performance.

Also, both the computers are capable of playing games on 1080p resolution.

Now I want to hear from you which of the gaming PC you liked the most. Just comment down below, I will appreciate it. For any questions and suggestions just comment below.